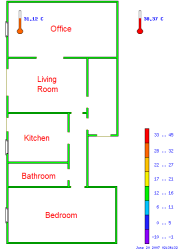 The main purpose of this project (the whole idea) is to be able to monitor varius aspects of my home while I am away. The project is a form of Web-Enabled Temperature Monitor. This project' is not security oriented, it just displays data on an image.

The projects is based around the PicAxe microcontroller and the Dallas DS18B20 temperature sensor. It's also using PHP for image creation and Perl/Python for data retrieval from the RS-232 serial port.

The central mechanism is a PicAxe 08M micro controller (uC) probing the thermometers and then pushing the data through a serial connection with a PC. A Python script running on the PC reads the data and it's pushing it to a backend PHP script on the Web Server (postdata.php). The PHP script stores the data in a text file (temp.txt), so the next time  someone refreshes the page the image is created based on the data in that text file.

The process of retrieving data and displaying it dynamically on the web page can be seen in the block diagram bellow:

Further analysis of the block diagram:


Please note that the house image displayed in the web page is actualy created by hand.  This is the base image used by the PHP script on the server to create along with the thermometer images the final image.