This is the second version of the Twitter+PicAxe project. What is different is that you don't need a PC and serial connection in order for the PicAxe to tweet! In this project by using the SimpleLan module (see more info here) updates can be sent from any available Internet connection. So, it's more like Twitter + PicAxe + Ethernet project. I'm using my aDSL Internet connection and also the SimpleLan module is connected on the aDSL modem/router.

The catch here is that you will need to somehow transform your UDP packets into HTTP requests since Twitter doesn't provide an API for UDP connections. So, what I have done is running a small Python script on a remote server (a linux VPS server actually) which listens for UDP packets. When a packet is received the script makes an HTTP request to Twitter using the data inside the UDP packet. You need to make sure to put inside the UDP packet the username and the password for the twitter account the PicAxe will use. You can see the comments in the .bas file. Also, make sure that your message is maximum 64 bytes. That is because the SimpleLan cannot send UDP packages bigger than 64bytes (actually it can, but it will just sent the first 64bytes...).

You can freely use my Proxy Server for your testing and for regular usage. Point your UDP packets to the host: syndicator.steliosm.net (might be better to find the IP first ;-).

The development took place on a eeePC using the newly released command line compilers for PicAxe. I also used a USB-to-RS232 cable since the eeePC doesn't have a serial port. I've used a breadboard for the circuit and small 08m proto board. Since this is my second PicAxe project built on the eeePC I think it's kinda cool having this small laptop creating firmware for microprocessors. 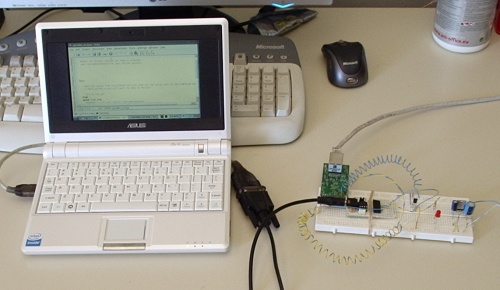 ASUS eeePC 701 and PicAxe with SimpleLan!

The circuit is based on the circuit provided in the manual (page 60) for interfacing the PicAxe to a DS18B20 temperature sensor. You are going to need the download circuit and a serial cable for the RS232 communication between the PC and the uC. I have also an LED on pin 1 which turns on whenever the PicAxe sends data to the PC.  Pin4, which sends out the data to be transformed to UDP packets, is connected to P4 on the SimpleLan module. 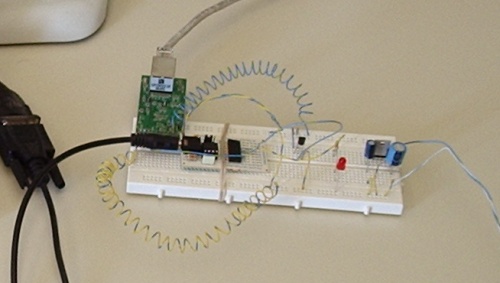 The SimpleLan P4 is connected on PicAxe Pin4


I will be releasing the schematics for both projects as soon as I find some more free time. The circuit is actually the one on the PicAxe manual plus the LED and the SimpleLan  (serial out) connection.

A simpler version of this project (uses a computer and not an ethernet module) can be found here. You can see the twitter page here.